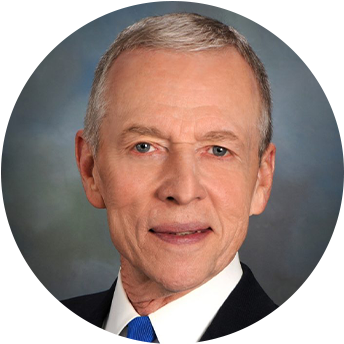 Phil Reberger is a partner in Sullivan & Reberger, with over four decades of public service in executive and Congressional positions. Early in his career, Phil served on the executive staff of the Republican National Committee under the leadership of two prominent National Chairmen – former President George H.W. Bush and U.S. Senator Bob Dole. A United States Navy Vietnam veteran, Phil served on active duty as Staff Pilot to Admiral John McCain, Commander in Chief Pacific. He flew missions throughout the Pacific area and Southeast Asia, in addition to many other assignments in the Navy. In 2002 he retired as a Captain, last serving as Chief of Staff to the Commander, Navy Reserve Security Group.
Phil’s extensive experience includes work with executive branch leaders in departments and agencies. He retired in 2003 as Idaho Governor Dirk Kempthorne’s Chief of Staff, a position he held since 1992 when he joined Kempthorne to manage his successful campaign for election to the United States Senate. Previously, Phil served for 12 years as Chief of Staff to Idaho United States Senator Steve Symms. In over four decades of public service, he also managed winning campaigns for two Governors and four United States Senators. These included Governor Kempthorne, Governor Godwin (Virginia), Senator Kempthorne, Senator Symms, Senator McClure (Idaho) and Senator Byrd (Virginia).
Phil is an Idaho Judicial Council member and Idaho State Building Authority Commissioner and a Mayoral appointee to the Capital City Development Corporation Board. Formerly Chairman of the Boise Airport Commission, he oversaw a successful $108.5 million expansion of the airport. In addition, Phil is a member of the Idaho YMCA Youth Government State Committee and the USS BOISE (SSN 764) Sponsorship Committee. Phil is a past Presidential appointee to the USO World Board of Governors and a past President of the Boise Lincoln Day Association.
A native of Caldwell, Idaho, Phil graduated from Caldwell High School. He enrolled in the Naval Reserve Officer Training the University of Idaho, where he earned a Bachelors of Science in Business and received the President’s Top Senior Award.